Do you have a recipe or cooking technique that you discovered a long time ago and still use today? This is one of those for me: both a recipe and a technique that I haven’t seen improved upon since I discovered it way back in 1978.

Rhubarb is one of the first food plants to be harvested from gardens in these parts. It is not a true fruit but is prepared in kitchens as if it were. Rhubarb has been perfected as an ingredient in pies, cakes, crisps and cobblers (often in combination with strawberries) but the simplest preparation, commonly known as stewed rhubarb, has not traditionally been a very appetizing way to eat this fruit. It is often stringy and cooked into a sloppy mush that lacks the beauty and integrity of the real fruit with its firm red and green stalks.

Way back in June of 1978 from a publication at the time called Organic Farming and Gardening, I ran across this recipe called Rhubarb Reborn. (I wish I could give credit here to the person who contributed the article but I only have one very yellowed and food stained page.)  All I can say is that this recipe gave me a whole new rhubarb eating experience. Simple is often the best.  Trust me, this recipe will be in your repertoire for a long time.

To make Rhubarb Reborn you will need about a pound of rhubarb stalks, so think about 4 cups of diced fruit. The recipe is easily adaptable as you’ll see so use whatever you have on hand. Don’t peel any of the stalks as the beautiful red adds colour to the prepared fruit. All the stalks need to be split lengthwise, even the very small ones. The large ones can be split four or six times. Each split section should be about 1/2 an inch wide. (This seems to prevent any stringiness.) Stack a bundle of the split stalks and slice about 1/4 inch wide. Now you are ready to measure your diced fruit and add honey. The proportion of sweetener to diced fruit is a matter of taste. For a tart sauce, use 2/3 cup of honey to four cups of diced fruit. For a sweeter, richer sauce use 2/3 cup of honey to two cups of diced fruit. I find the more tart version plenty sweet enough for my taste. The prepared fruit needs to soak  for at least an hour so all the cut surfaces can soak in the honey – a couple of hours is even better or overnight is ideal. You’ll notice that the juices from all those cut surfaces combines with the honey.

This part of the recipe is really important. Quickly bring the diced fruit to a simmer  and let it simmer for barely a minute. 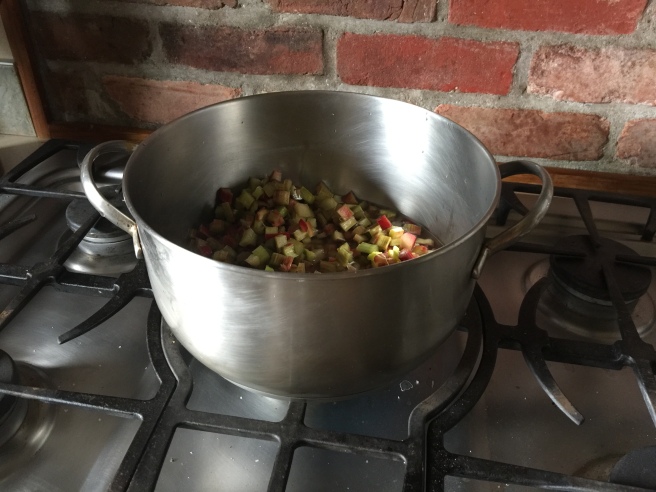 Remove it from the heat and put on a lid. The fruit continues to soften in the hot syrup. Don’t overcook it. Et Voilà, finished! If you wish you could add some cinnamon or ground ginger for a little extra flavouring, but I like mine just like this.

The colour of the prepared rhubarb mimics the climbing honeysuckle in this picture.

This preparation freezes really well and looks and tastes the same unthawed as when originally prepared. It is delicious alone but can be added to yogourt or granola for a seasonal breakfast or eaten with ice-cream for a sweeter dessert later in the day. Add a tablespoon or so of the sweetened sauce  to a glass of sparkling water for a refreshing summer drink on the patio. 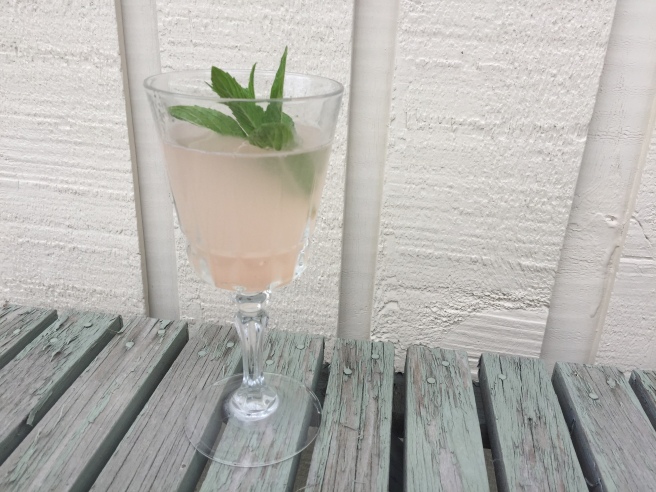 The sauce gives the sparkling water a beautiful pink hue.

Rhubarb Reborn can also be made unsweetened and used in meat sauces or other dishes. For this preparation cut it the same way but instead of honey simmer it in a few tablespoons of orange juice.

Do you have a favourite way of preparing rhubarb? I would love to hear about it.