Maurice Sendak (Where the Wild Things Are)

Night noises can usually be explained when I’m at home in my own bed. That loud cracking that jolts me awake on the coldest of winter nights? The wood in the house getting a bit testy because of thermal contraction and expansion. The ruffling noises in the wall? Mice are in the insulation again. (I make a note to myself in my half awake state to buy a mouse trap or get another cat – which oddly seems like a good idea at two o’clock in the morning.) The distant rumbling sound? One of the few trains that ply the tracks in this mountain valley. Yes, all the night sounds are usually explainable and only a minor distraction.

Night noises here in Mexico take on a whole new level of urgency. On one of the first nights here as I was falling asleep, I heard a loud chirping/cackling sound coming from the bathroom, which just happens to be located about a foot and a half from where I sleep. My husband nonchalantly suggested that I get up to investigate. Was he kidding me? I keep  a flashlight beside me at night so that I don’t unwittingly step on a scorpion if I have to get up, but what good could that possibly do if I met this? 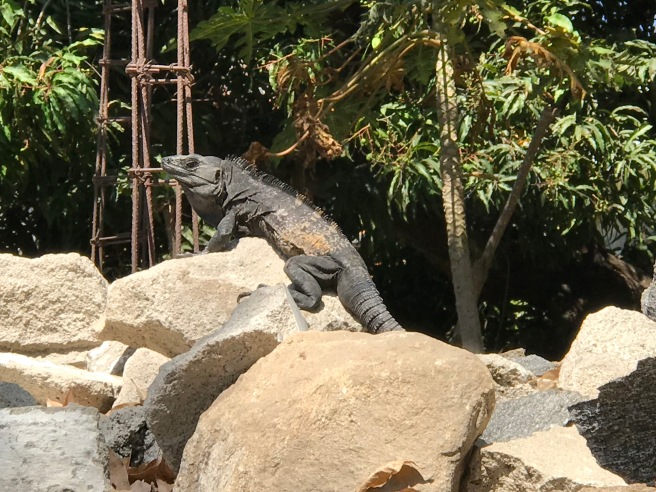 I lay there for awhile contemplating my options and decided that I wasn’t going to sleep anyway, so I might as well take a peek. Picking up my flashlight, I tentatively moved the curtain aside and….saw nothing on the floor, or in the shower, or in the sink. I’m breathing by now and the beams from my flashlight probe the walls. That’s when I see this.

Our resident gecko. Who knew a little-ish thing could make such loud, disturbing sounds?

Feeling calmer now, I decided to return to bed. I climbed in, turned off my flashlight and put it safely back under my pillow.

4 thoughts on “Things That Go Bump In the Night”