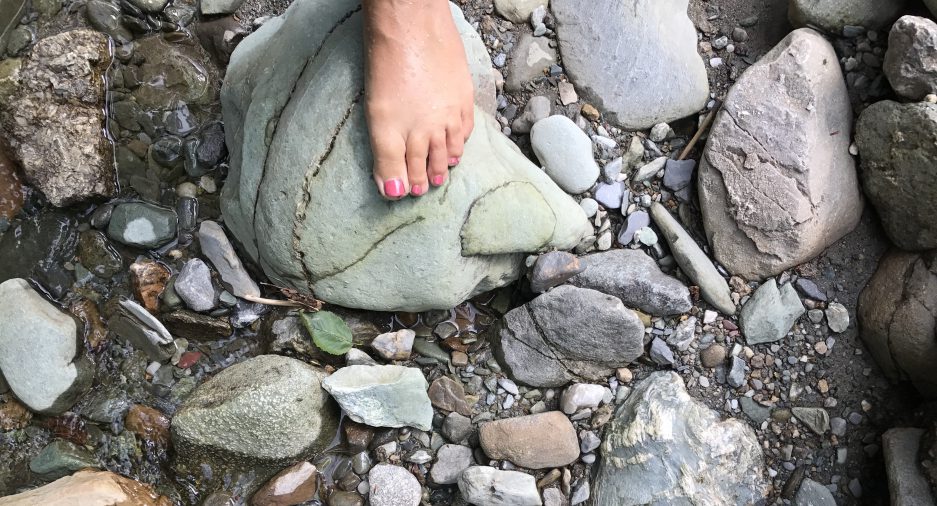 There was an internet meme being passed around a few years ago that struck me as truth. It described the five stages of creativity this way:

Nothing I had seen to date had captured my creative process so accurately.

I am a lover of the blank page, a still rolled skein of wool, an untouched canvas on an easel, a bare patch of soil waiting to become a garden. They are all so ripe with possibility that my heart skips a beat just thinking of all the beauty lying dormant waiting to explode out into the world. There is nothing quite so saturated with colour and possibility as the imagination. Imagination lies in the realm of the gods. That is, until we try and pluck it from the ethers and bring it down to earth.

Ann Patchett, the American novelist, describes this phenomenon in her short story The Getaway Car . She likens her imagination to a butterfly with wings of indescribable beauty as if cut from the panes of the rose window in Notre Dame. It is glorious and free and holds all the possibility of the world. Then she begins to write and it is here that the butterfly gets killed.
It’s not that she means to kill it, it’s just what happens when something as beautiful and three dimensional as the imagination gets flattened into two dimensional form with words.

It’s an act of great bravery to put the first stroke of paint on the canvas or to type those first tentative words on the blank page. Most people never get to this point. That is how much courage it takes. Giving myself permission to play and not worry about the finished product has been the key for me. I have never completed a project that doesn’t have some mistake woven into it. Many times the final work feels as if it only tells part of the story and is unfinished somehow. I am okay with that now. Paul Gardner says it this way, “ A painting is never finished – it simply stops in interesting places.” The mistake, the imperfection, is what gives my knitting character, my words a voice , my gardens my personal imprint.

I am drawn to create and work with my hands but nothing quite prepared me for the extreme discomfort I inevitably feel at some point in every project I undertake. The initial excitement (bordering on euphoria) of beginning a project moves quite quickly into the “this is tricky” phase for me. I remember painting for the first time and realizing that the paint was not behaving in the ways I was expecting. It was thick and began drying before I could get it on the canvas. The luxurious, cashmere wool I bought also held so many possibilities for me. I had never felt anything so soft and buttery and just thinking about it next to my skin sent me into paroxysms of joy. Only to discover that the fineness of the thread and the lacy pattern I had chosen made knitting with it very, very tricky and fixing mistakes almost impossible. Writing is also fraught for me. Finding the right words to describe a feeling, a knowing, can be extremely tricky. And say nothing about gardening. Trying to keep unruly plants in harmonious colour schemes or in waves of colour is very, very tricky.

To get past this hurdle, I allow myself to produce a “shitty first draft,” as Anne Lamott calls it. This doesn’t mean that at some point in the process, I don’t gather the section of words that feels authentic and truthful or don’t go back and repair a gaping hole in my knitting. It just means that I am willing to start and take my process where it wants to go. There is always another story to write, another scarf to knit, another garden to plant and these too will be filled with the same sense of wonder and possibility when they are in the imaginative phase. And each one will also be very, very tricky.

Coming on the heels of “This Is Tricky” is the “This Is Terrible” phase. It is at exactly this point the project will either move ahead to completion or be turfed. I remember looking at my scarf as a young girl of eight and realizing that what I was knitting was not beautiful at all. It had holes that I was inadequate to fix on my own and I had dropped stitches along the way so it had been getting narrower and narrower as it grew in length. All this as I was listening to my mother’s needles clicking away rolling out what seemed to be reams of flawless knitting.

Feeling that something that started out with such glorious possibilities has turned into something terrible is very hard to stomach. It is looking at the glorious butterfly of Ann Patchett’s imagination and seeing its “broken body chipped, dismantled, and poorly reassembled. Dead.” It is a wonder that any books get written or any artworks shown given this train wreck phase of the creative process. But this is exactly the time to keep on going, at least in most instances, and the only way to do that is to breathe, put it aside for a few days if one must, and then slog on being totally uncomfortable but also willing to bring this imperfect mess to completion.

And speaking of imperfect messes. How about our own role in this fiasco? It is here that it all gets very, very personal. It is not that great of a leap to go from this is terrible to I am terrible. We are, after all, the creators of this mess and we don’t have to go very far to start assigning blame. And every single worthiness issue we have ever faced in our life gets triggered when blame is assigned and the recipient is ourselves. Shame, of course, is a huge suffering place. The only way to get to the final step in the creative process is to wade through this swamp.
And how to do this? Continue on allowing the imperfections to surface, correcting those that can be corrected and accepting the rest as part of the practice that is required to become an expert at anything. It helps to speak to others engaged in creative endeavours because every single one of them is familiar with this place. And they don’t let it stop them.

For me, the “This Is Awesome” phase doesn’t begin with such a strong pronouncement. It is more like, “This Is…..,” followed by a long pause. I need to give myself some distance from what I have created before I can look at it with any kind of objectivity. (I have learned this is probably not the best moment to share my creation with others.) I vacillate between being super excited that I was able to create something given what I had to go through and wondering if there is anything at all redeeming about it. With a little distance, and looking at it in different lights, I begin to see ripples of beauty here, the truth of words spoken in honesty there. Somehow, that is enough to infuse the whole thing with “awesomeness.” And this belief in its awesomeness paves the way for the next great idea to land.